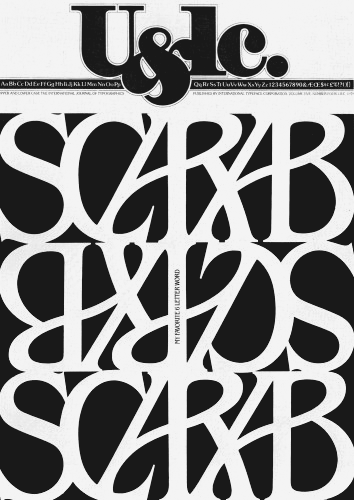 THE 1970s DECADE is called the “pivot of change” in the twenty-first century, particularly with reference to economic upheaval (so what else is new?), as well as the “Me” decade by novelist Tom Wolfe because socially it marked a move from communitarianism in the ’60s to atomized individualism. Think sideburns-plus, bell-bottoms, platform shoes, Led Zeppelin at first, disco later.

Buckminster Fuller continued his architectural experiments with geodesic domes and the high tech style was born, though Frank Lloyd Wright and Mies van der Rohe were still major influences in its early years, postmodernists advocating a return to premodern styles later to incorporate pop elements to appeal to a broader public and to form for form’s sake.

Herb Lubalin, famous for his typeface designs and typography, became known in the ’60s for his dynamically minimalist art direction of magazines like Eros, Fact and Avant Garde. Many magazines of the time followed the Reader’s Digest template which were all sugar and no spice. Since the publications he worked on contained spicy content, he chose not to equal it with shocking design, instead creating beautiful layouts to appeal to the counterculture’s increasingly liberal views.

Also notable were Lubalin’s logos, among them the ones for PBS, the World Trade Center (1969), and Just My Type, a greeting card company.

The 1970s also saw Lubalin devoted to his magazine U&lc, a platform for typographical experimentation.

It inspired the appearance of Emigre magazine from 1984 to 2005 in San Francisco, published by Emigre Graphics which also created a digital type foundry.

Steven Heller, for 33 years the senior art director at U&lc, argues that it was the first Emigre, or at least the template for its later successes, for the combination of self-promotion and revolutionary change in type design that Lubalin’s magazine embodied.

Heller further notes, “In U&lc, he tested just how far smashed and expressive lettering might be taken. Under Lubalin’s tutelage, eclectic typography was firmly entrenched.”

Emigre was one of the first publications to employ Macintosh computers which had a large influence on graphic design everywhere.

Eclectic typography: unconstrained, spontaneous, energetic, all adjectives to describe the effect of design that was painstaking to create.

After graduating from high school in 1972, you walked across town to audit college classes, slept on friends’ dorm room floors and ate for free at the Hare Krishna temple, but if you hadn’t dropped in on that calligraphy class, the Mac would never have had multiple typefaces nor proportionally-spaced fonts. Good on ya.