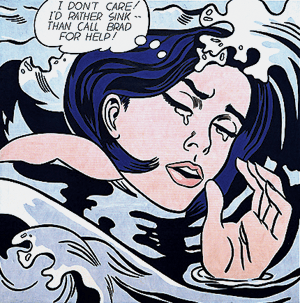 The Mies van der Rohe building Barcelona Pavilion cited in an earlier blog about the Bauhaus (see “the Bauhaus and the international style”) is an example of minimalism in architecture and design, the “less is more” approach initiated by De Stijl (see “De Stijl: Mondrian, Oud and Van Doesburg”) and inspired by traditional Japanese architecture.

Both minimalism and pop art were precursors to what is called postmodernism, which contradicts modernism in that it tries to break down the barrier between high-brow and low-brow culture, as well as recycle past styles and themes in a new context.

Pop art exploits facets of mass media such as advertising, mundane found objects, kitsch and comic books with an emphasis on irony, parody and humour.

Dada had an anarchic attitude, destructive and satirical, born of the horrors of World War I (see “El Lissitzky: revolutionary pioneer”). Pablo Picasso, Kurt Schwitters, Marcel Duchamp and Man Ray had anticipated pop art in some of their works.

But pop art took a different stance, however much it borrowed from dada. It affirmed the commonplace in a detached manner. Two American artists are its outstanding classic representatives:

The artist himself never took his work too seriously but he defines pop art’s best use of parody and its idealization of mass production, merging mass culture and fine art.

The only logo he ever designed was his last commissioned work in 1996, a project he took on because he knew famous music executive Mo Ostin and producer David Geffen of DreamWorks Records.

The Prince of Pop, after a successful career as a commercial illustrator, became a celebrity who celebrated celebrity and explored the relationship between advertising and mass culture in various media: drawing, painting, silkscreen, sculpture, film and music. He also pioneered the use of the computer when the Amiga became available in the 1980s.

Fame came in the 1950s for whimsical fashion illustrations of shoes. His ink drawings, and later works, had a casual quality and were characterized by flaws of which he said, “When you do something exactly wrong, you always turn up something.”

Warhol designed many album covers for music from jazz  to rock, including two for The Rolling Stones.

The 1960s brought success and scandal but the ’70s were entrepreneurial. Warhol said, “Making money is art, and working is art and good business is the best art.” His new publication, Interview magazine, featured intimate conversations with celebrities.

By the 1980s Andy Warhol’s work had attracted criticism for being shallow, concerned only with profit. True as that may be, his art was a mirror held up to the spirit of the age, the glamour of the latter half of the twentieth century. His paintings are among the most collectible and valuable ever sold, and the Andy Warhol Museum in his native Pittsburgh, Pennsylvania, is the largest museum in the United States dedicated to a single artist. Evidently he touched many souls, however lightly.